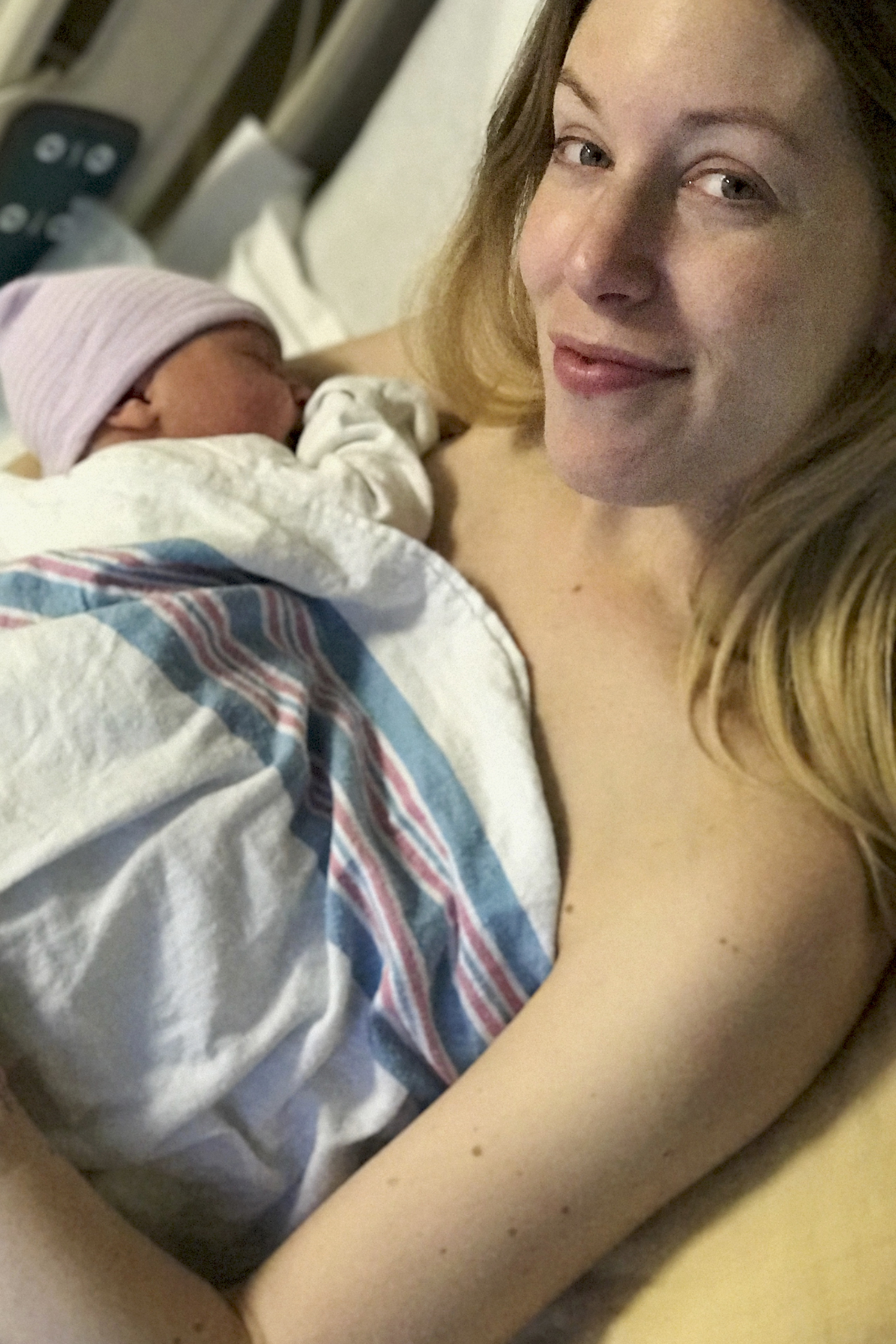 I’m 4 months overdue with this post, but I guess that’s a good summary of what motherhood is like. So much gets put on hold and the baby makes it hard to get things done. I wouldn’t change it for the world, but man, life is different these days. As Seth Meyers recently acclaimed, you’re not a parent and then suddenly one day you are. 4 months ago my life changed forever.

Like many mothers to be I’m sure, I went into this whole birth thing with a plan—a way it’s supposed to happen with 9 months of preparation, including birthing classes, the stack of books I consumed every night, the apps / blogs / sites I devoured for information, talking to moms that have gone through it. Just as life happens, it doesn’t always go exactly as planned.

For pain management I studied Hypnobirthing (a birthing method like Lamaze, but focus on the mind and meditation, rather than just breathing) with one of the best teachers, Maéva Althaus. My goal was to get through as much of the pain as I could tolerate with using these techniques that I studied and practiced, along with my husband every night for months. The idea of this method is that when you’re calm and relaxed, you produce endorphins instead of stress hormones so you end up feeling less pain.

Hypnobirthing definitely helped me have a healthy pregnancy and a birth with less complications (I’ll get to that later). I owe my baby being in the optimal position for birth to the practice and the exercises that Maéva taught us. The techniques got me through some of the most uncomfortable moments in pregnancy, including falling TWICE towards the end. I ended up in the hospital for 24 hour observation both times and the guided meditations really relaxed me in that setting. I also looked at the hospital stays as trial runs for the big day and it was comforting to know that my baby was healthy and well.

My OB-GYN saw the Hypnobirthing book I was studying and said, yea good luck with that…you’ll probably ask me for an epidural. While I would have loved to have proved her otherwise, she ultimately was right. I do think that the birth would have had more complications if it weren’t for Hypnobirthing because I wouldn’t have progressed in my labor as much as I did without it.

At my 40 week appointment, my OB-GYN said my amniotic fluid was low and I would need to come back in a few days to have it checked again, otherwise I would have to get induced. That was something I knew I wanted to avoid because it’s so unnatural and I heard you’re more likely to have complications and have even more pain than normal. Go figure as I got off the exam table, we realized that my water was actually leaking. She said, “Go home, have dinner, take a shower, get your things together and I’ll see you at the hospital tonight.” The thing I wanted to avoid the most, getting induced, was now going to happen.

We planned to have a doula at our birth to help make sure everything went smoothly. I was so grateful that we did when we found out I was getting induced. It was important for me to have that support we needed and an advocate for us while at the hospital, not to mention someone to keep my husband calm too. We were for sure going to need all that if I was going against everything on my birth plan (which by the way, I don’t think anyone at the hospital looked at after all the time I took to put it together!).

We decided to go with an amazing duo of doulas called Doulight NYC  because they had the experience, including with Hypnobirthing, they guide you before, during and after the birth and especially because there were two of them so one would be at the birth.

We called them to say it was “go time,” but it turns out ours was the first birth that they were double booked on. While they kindly put us in touch with another qualified doula, all I wanted was one of these ladies that I felt comfortable with there. One half of the duo, Emilie, told us she was going to finish with the birth she was booked on and then come to ours. My husband Josh told her she was crazy because she wouldn’t get any sleep. She replied, “I don’t need sleep. I’m a WARRIOR.” That was an understatement. I was lucky that she made it and powered through what ended up being about a 24 hour birth.

Late that night we grabbed our bags and took an Uber to New York Presbyterian Methodist Hospital in Brooklyn. The intern in triage examined me and said that I was only 1 cm dilated and my water wasn’t leaking so they were going to send me home. In New York state, if your amniotic fluid is leaking or broke, then you legally have to have the baby within 24 hours to avoid bacteria reaching the baby. Scary stuff. As much as I wanted to labor at home, I felt safer in the hospital. The triage nurses called my doctor, who insisted that I stayed. I was relieved. This baby was coming.

After a few hours, I was transferred to a labor room. Josh and I slept there through the rest of the morning and they began my induction process with a pill that dissolved in my cheek. My doula Emilie came straight from the other birth and arrived shortly after.

As soon as she arrived, she took all of the photos and things that inspired me, including Hypnobirthing affirmations that I drew, as well as fairy lights that she brought and hung them on the wall in front of where my bed was. I especially focused on the image of me holding my nephew about a decade ago, who at birth was 10 pounds and my sister ended up birthing naturally. That was my biggest inspiration.

We also dimmed the lights and put battery operated tea lights out around the room, along with a Spotify playlist that I spent months making with my favorite songs. The nurses said it was pretty zen in our room. 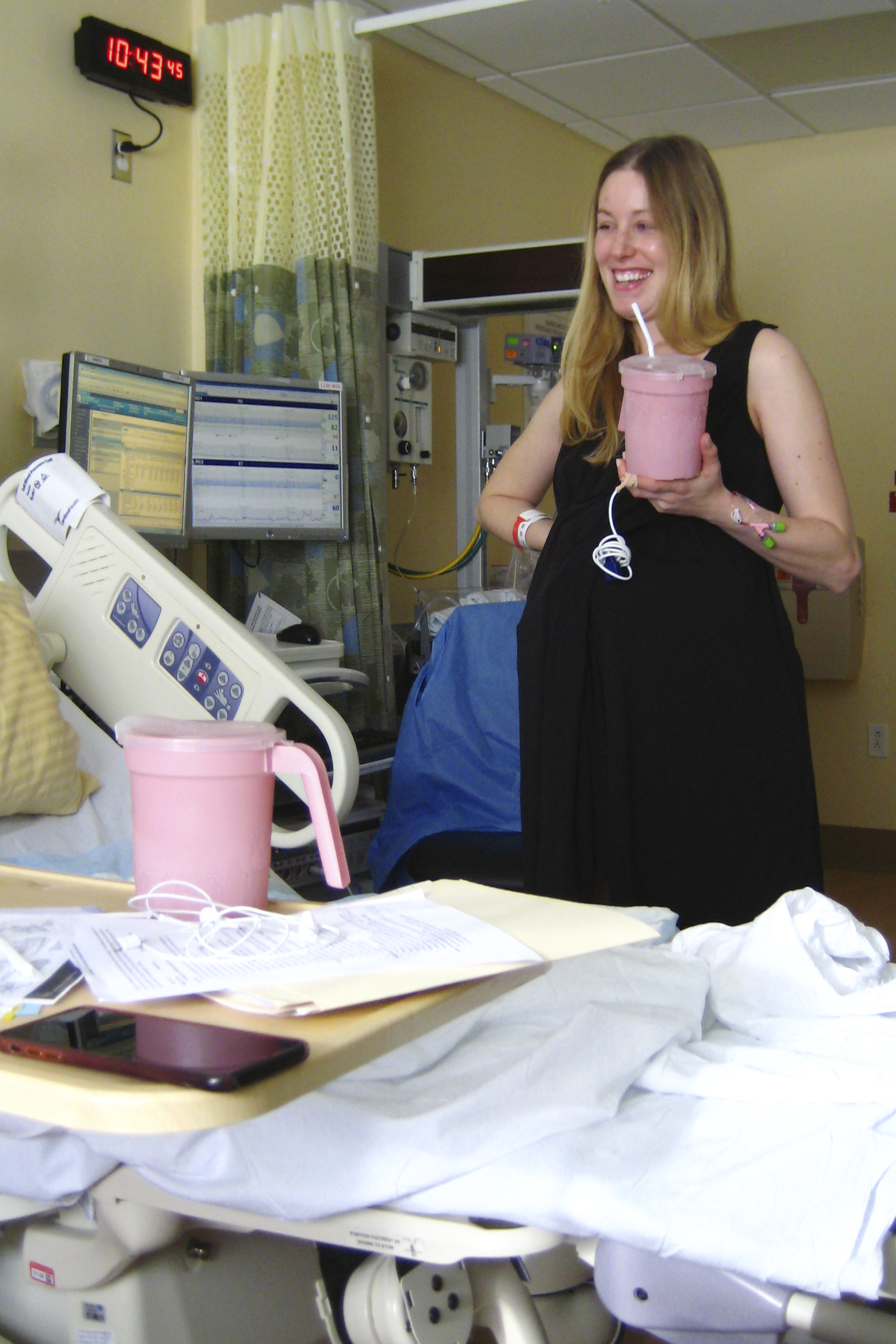 It was a waiting game for the induction to kick in, so after a nap, Emilie ran out to get some magazines for us to kill the time. I got maybe 5 pages into the magazine, the contractions were getting stronger and I couldn’t focus. I remember listening to her and Josh trying to have conversation to get my mind off of the pain. I spent most of the day moving between bouncing on a birthing ball, roaming through the halls and swaying with Josh. 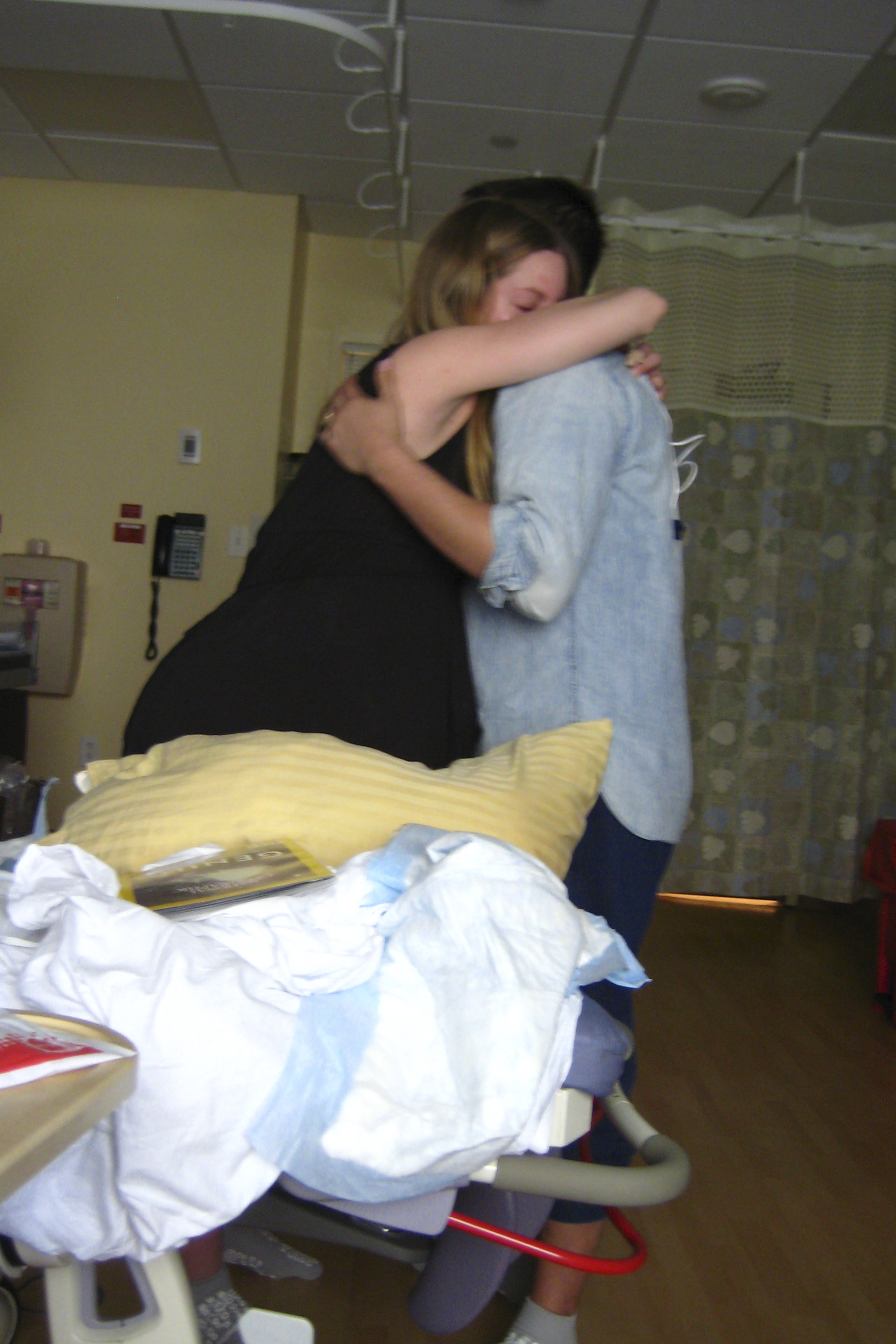 I was only at 3cm after a while so my OB broke my water and soon the contractions grew so strong that I was shaking. At that point I kind of blocked out everything other than Josh reading me the Hypnobirthing rainbow relaxation meditation, gently touching my back while I moaned and sat hunched. Emilie recorded it and I only recently saw how sweet it was. She said at that she had to step away from being my doula and just be a witness to this special moment. 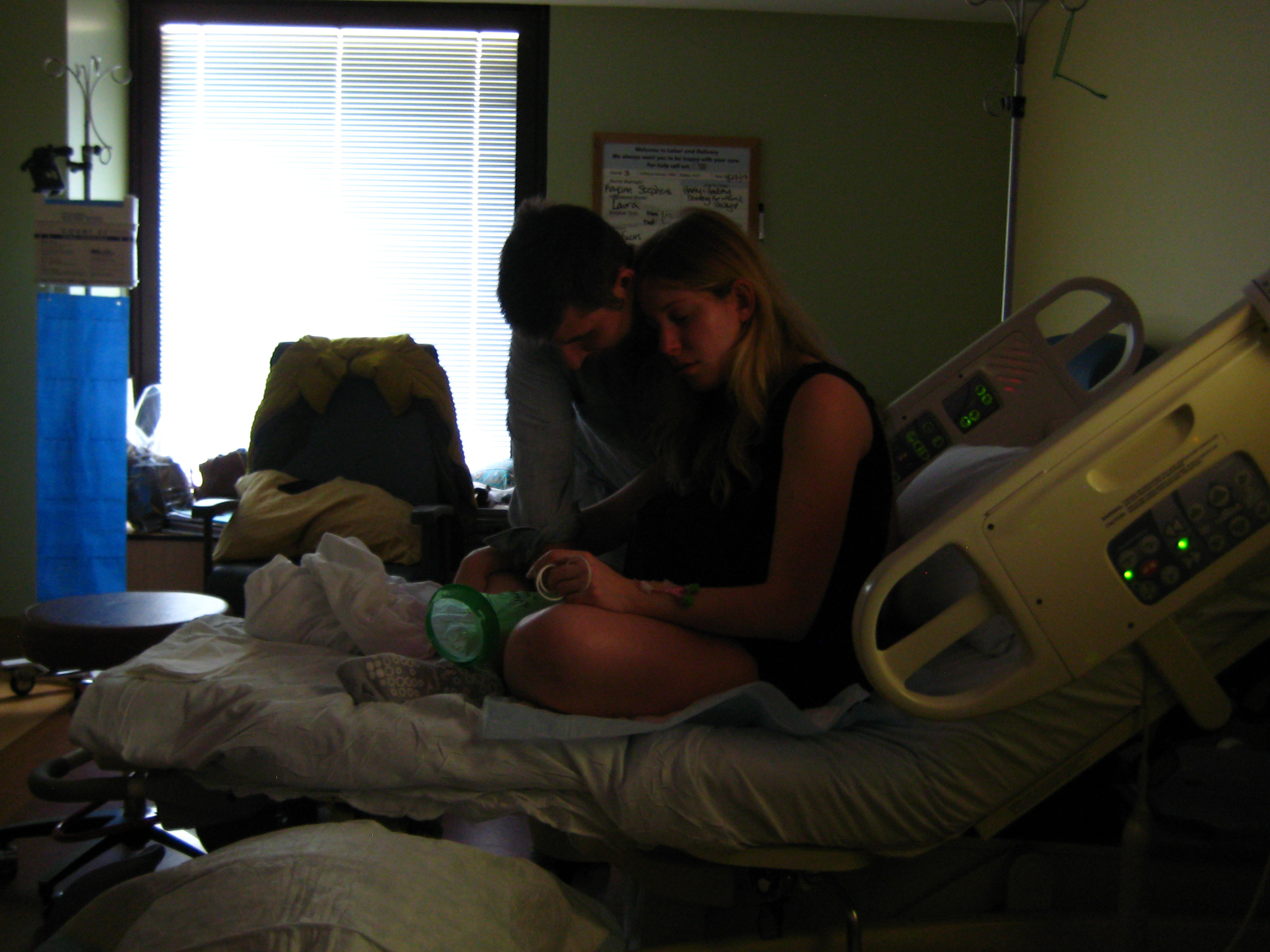 After half the day in active labor, the contractions came closer and stronger to the point where I was flailing my body and felt like some bodily function was going to come out either end. Emilie said it sounds like I was ready to push. I kept crying that I can’t do this and I needed to leave my body! She said I was at the .2 of the 26.2 miles of a marathon and I was so close to the finish. I took a breath and regained my strength.

The nurse examined me and said my cervix was fully effaced (softened), the baby’s head was fully dropped, but I only progressed to 4cm. In other words, the baby was ready to go but my body wasn’t. At that point, I shouted, I want the epidural.

I had it written in my birth plan to avoid an epidural unless I ask for it. Maéva, our Hypnobirthing instructor suggested that we have a code word with our partners in case we did want it and wanted to be really sure. Josh and I never made up a code word because we figured we either wouldn’t need it or would really be sure. When I demanded the epidural, Josh said to the nurse, “she doesn’t mean that.” I still insisted and said I wasn’t going to get anywhere if I didn’t get it. As much as I had planned to manage the pain naturally, it wasn’t worth my pride to suffer. Emilie originally said she would insist on the epidural too if it looked like I was suffering and she agreed.

I think the epidural was more painful for Josh than me because he watched the giant needle go into my spine between contractions that came so strong and close, it was hard to be still for the anesthesiologist to administer the epidural. The contractors were by far worse.

I made sure to get the least amount possible and not top it up because I still wanted to feel the pushing. After a much deserved rest, the doctor then checked on me and I was now only at 6cm so she decided to induce me further with Pitocin, which makes contractions even stronger. Just when I thought the pain and pressure couldn’t get worse, it got nearly unbearable and I had to increase the epidural.

At around 2am, it was time to push. Everything I learned in my Hypnobirthing classes at that point went out the window because I was confined to the bed due to the epidural. My OB instructed me how to push…really like “taking the biggest poop of your life” and thats what I did. About 20 minutes later, the song “Who Loves The Sun” by Lou Reed was playing and our sweet Asher Reed was born.

Thanks for following me through this journey and I’m excited to share more posts on this next chapter of motherhood soon. xx 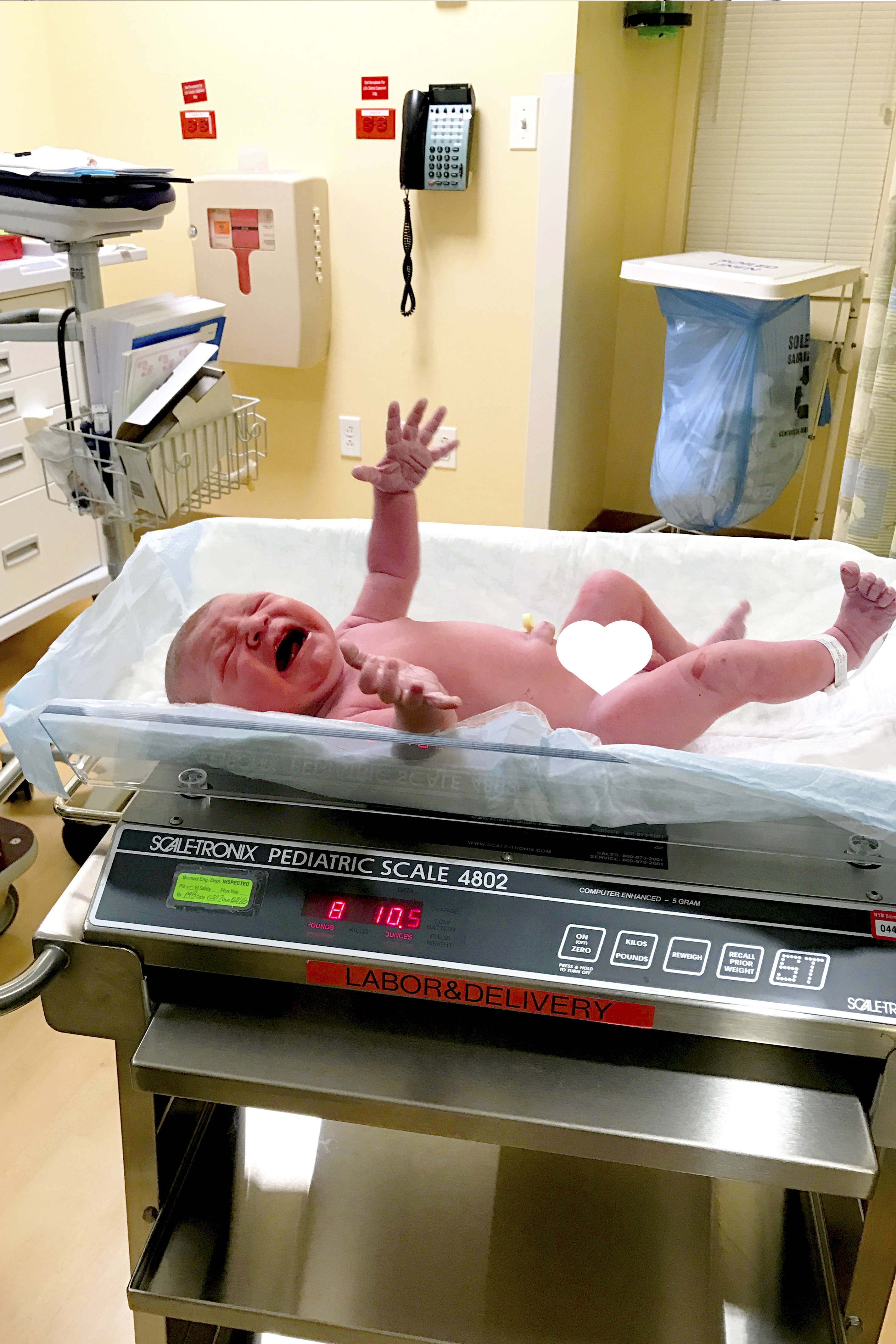 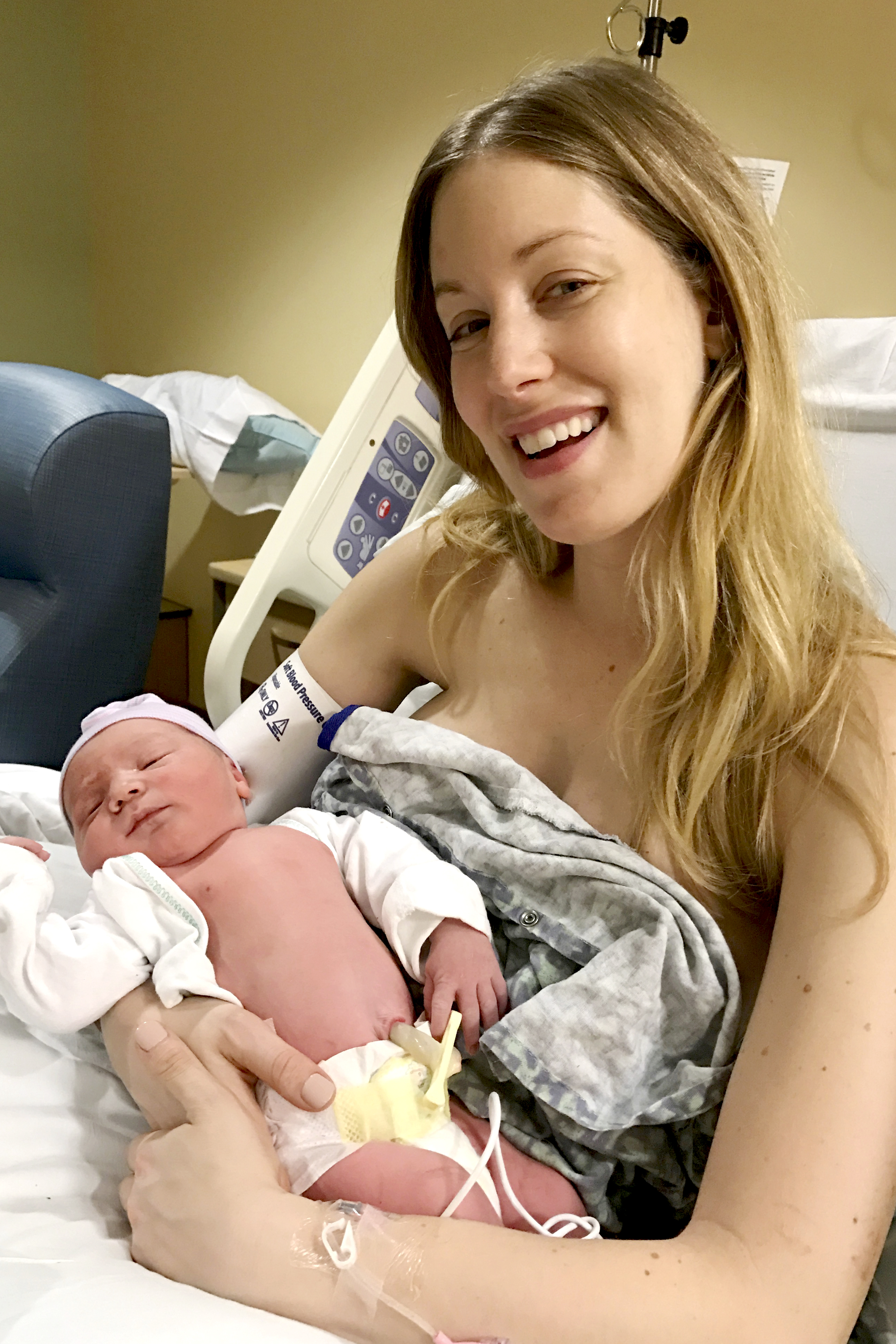 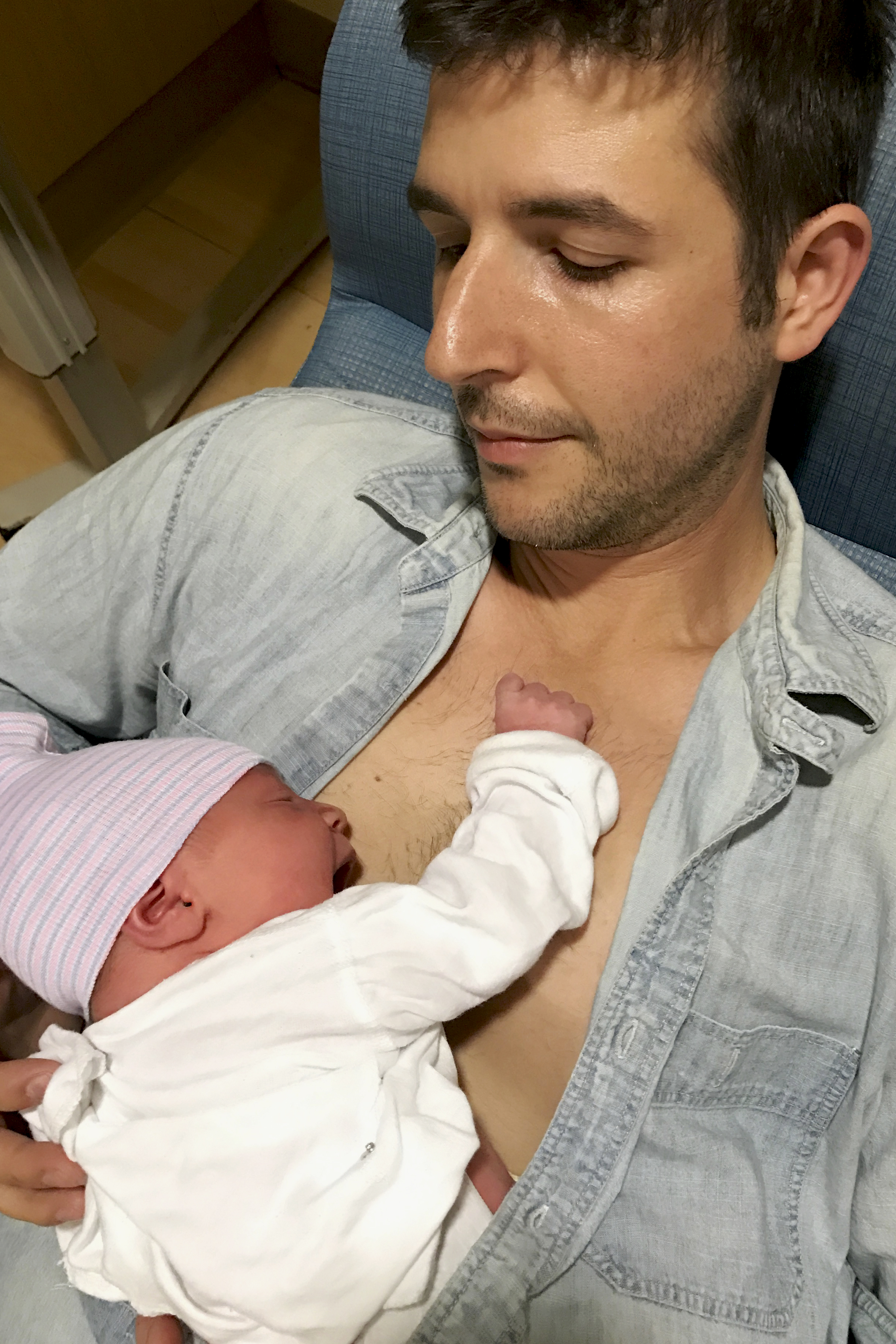 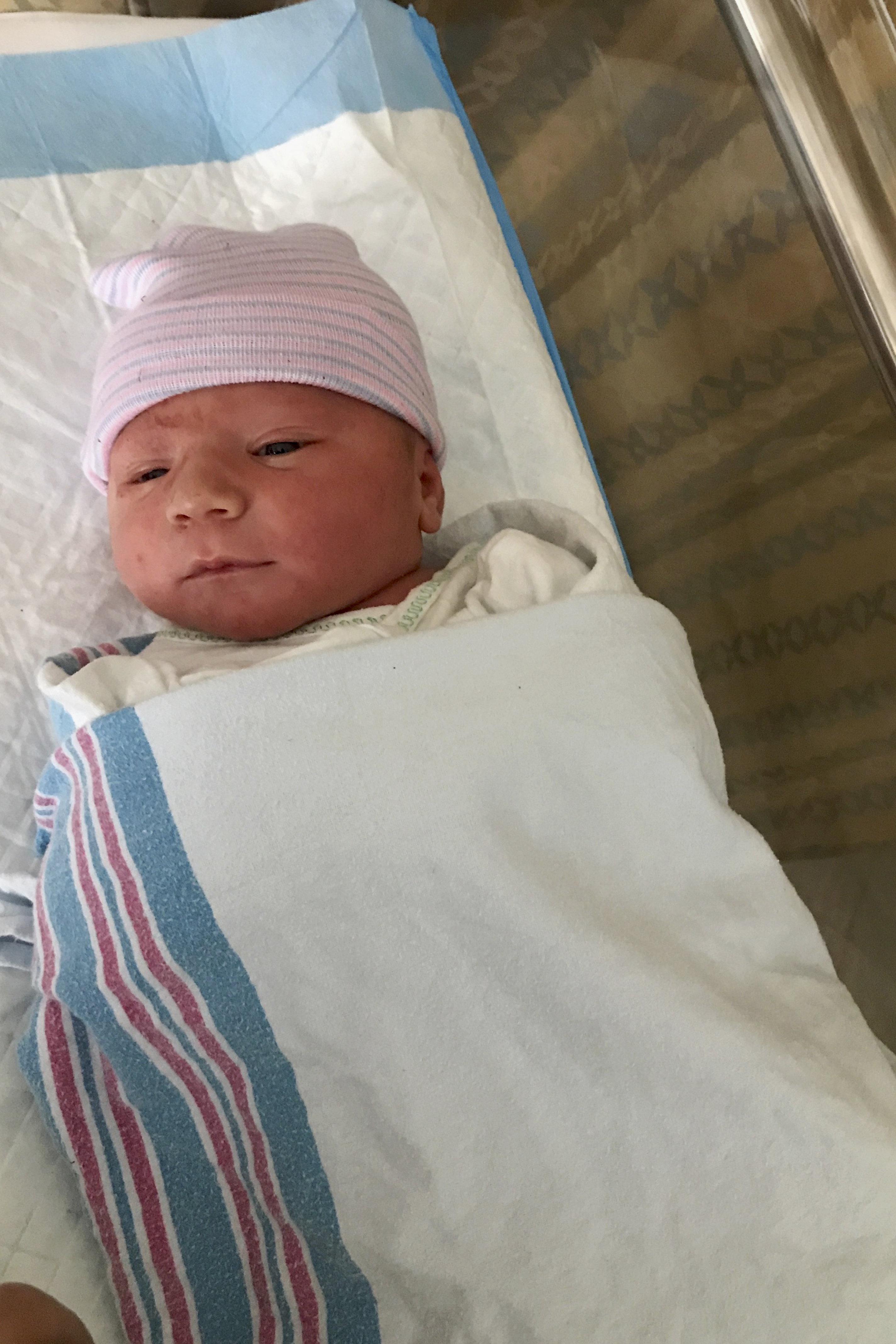 STYLIST TIP: I highly recommend this birthing gown which makes you feel more like “you” than wearing an uncomfortable hospital gown.